Pink is going red for a day!!
Friday, February 3 is National Wear Red Day. It will be a day to raise the awareness of women’s heart health.

Please join the lovely ladies of the Xi Beta Omega Chapter of Alpha Kappa Alpha Sorority,Incorporated by wearing red in support of National Wear Red Day on February 3, 2017!
Heart disease is the #1 killer of women and did you know that every 80 seconds a woman dies of heart disease?

Let’s spread the word and knowledge about healthy hearts and women’s health care!
Thank you in advance for your support.

Although she trained to be a language teacher, she demonstrated mastery in home economics, resulting in administrators requesting her to concentrate in the area and leading to a master’s degree in home economics. Ms. Burke taught in public schools (Kansas City, MO and Atlantic City, NJ) and at a state institution in Dover, DE, served as manager of a housing project (Atlantic City, NJ) and was director of a residence hall for female government employees (Washington, D.C.).

Since learning about the upcoming film in early 2016, we have worked with the production company to share the story of these dynamic sorors who helped change the course of the U.S. space race. Alpha Kappa Alpha Sorority was one of the first to recognize the achievements of these ground-breaking Sorors – 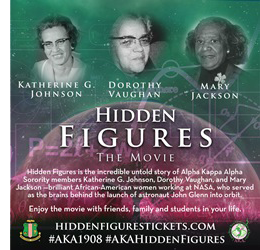 starting with recognition of Soror Katherine G. Johnson at the 2016 Mid-Atlantic Regional Conference.

In July, Soror Johnson received the Septima Poinsette Award at the 67th Boule Public Meeting in Atlanta. Also, sorors who attended the Undergraduate Luncheon at the Boule were treated to a sneak peek of the film by keynote speaker Janelle Monae, who plays Soror Mary Johnson in the movie. The sorority also recently co-hosted complimentary screenings for Sorors, their families, friends, and ASCEND students in more than a dozen cities across the country.

It is important that Sorors and our community support films such as Hidden Figures to ensure our stories continue to be told on the big screen. We encourage every soror to see the movie with Sorors, friends, family, and students as part of a Sisterly Relations Day activity or another outing. For tickets, please visit www.hiddenfigurestickets.com. Please share Alpha Kappa Alpha Sorority’s tribute video to Soror Katherine G. Johnson and post pictures from your movie outings to social media using #AKA1908 and #AKAHiddenFigures.

Mrs.Keith also had the opportunity to serve as a Co-chair for the 57th Biennial Convention.